Creating a new project in ICD with PPKG…

In the first part, I didn’t talk about ICD’s magical purpose, which is the creation of a new project… Below are the captures that show all the steps to the creation of a package in ICD. In other words: launch ICD and follow each step: 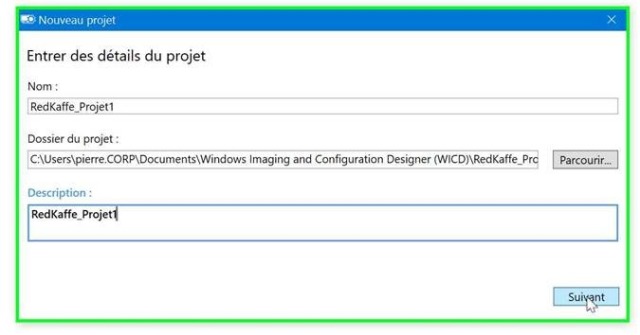 Name it and enter the details

Chose the mode “Common to all Windows Desktop Editions”

If you have a previous PPKG to import, select it, but here we don’t have any!

When you finish the project, once you’ve set all the settings, you just have to save the project and export it in the PPKG format (the menu is on the left upper corner). The project saves the settings in ICD, PPKG is the provisioning package that will be applied on the desktops.

TIP: In case you want to erase projects that appear when you launch ICD you just have to edit the XML file as shown in the capture below:

Each project has its own section; you just have to erase the ones that appear when ICD launches, and restart ICD to make the change effective.

Projects and packages are saved by default in the user profile, as shown in the capture below.

These are ICD’s basics!

Office365 case (and other complex applications)

Let’s get back to our applications. My client also wanted to test Office: either deploy the heavy “ISO” version or Office365 in its “Cloud” version.

In this case: French, 32 bits and with no GUI during installation…

Launch the command in order to initialize the download…

Wait until the download finishes, when it’s done you will get the prompt back (as shown below)

You can then close the window.

Now you have the up-to-date install files for O365. We’re set!

We send it to a Windows compressed folder (to be sure that PowerShell will unzip it correctly).

This is what we have to get in the end.

This is the file that is used as a source when integrating it to ICD. It is also used by PowerShell’s script (Thanks to Samir) when installing O365 on the PC.

Each one in its zip folder and with its PowerShell installation script that is called by the orchestration script.

In ICD, you can see all the changes effective inside the project… It’s cool to have an eye on all the things you have done, and check that you’re not missing anything…

Cortana, Telemetry, ADDS and other settings…

These are the hot spots of ICD… everything works perfect…say, fine!

Here is where you will find different items…

And here, as an example, are the values used for the test:

TIP! Be careful! when testing on HYPERV, VM’s SERIAL are more than 15 characters (maximum allowed for the PC Name) and it fails on that part. Put a fixed value or go to the online help to find the right combination for you.

Regarding the “Upgrade Edition”, you’ll find it here:

Back to the client’s case: his naming convention didn’t match with ICD possibilities, so we did not use that part. Instead, we had to use a PowerShell script, that prompted the user and verify the correct syntax of the computer name, and then join the domain and finished with a scheduled reboot. Due to the reboot, this script has to be called last by the orchestration script.

Save your project by clicking on : File/Save

It saves an XML file 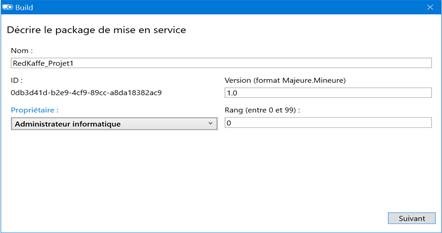 Rename it, or use the default name (usually it’s the name of the initial project), use the version number, it helps when debugging 😉 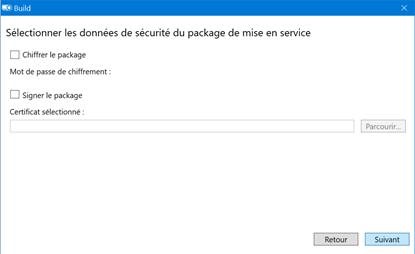 TIP! In production use a PUBLIC certificate if the package is meant to be applied to a non domain joined PC, your internal PKI’s certificate will not be recognized until the PC is domain joined… 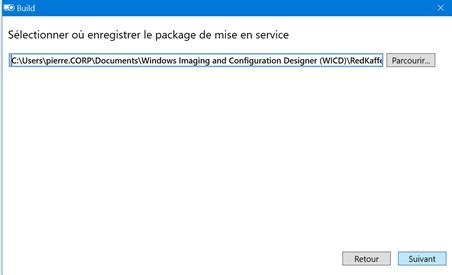 Validate the path to save the PPKG

Now is the good time to go grab a coffee!

Here is our PPKG!

Copy it on a thumb-drive, take a clean machine, or a test VM, double click it…there it is… We’ll finish this on next post!

Have a nice day